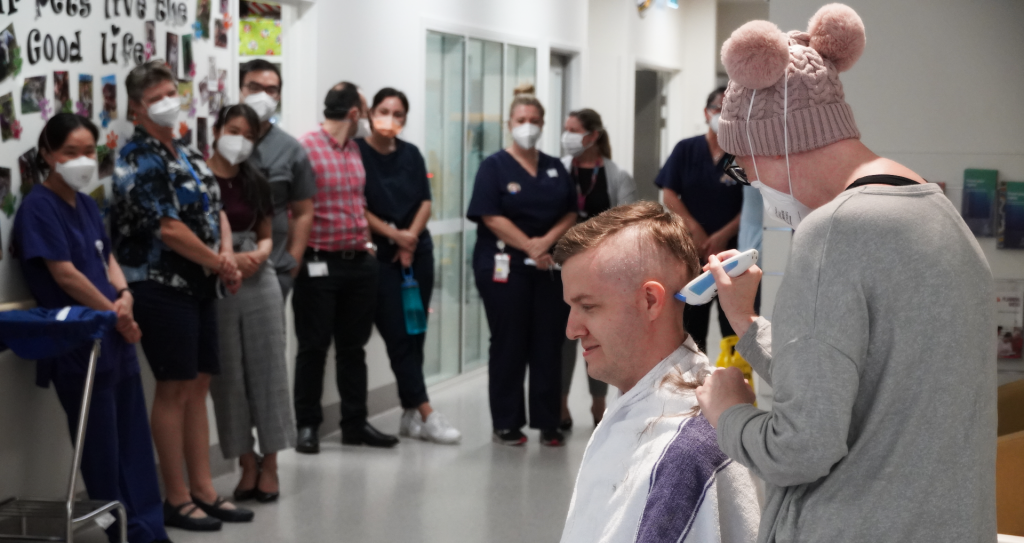 At the Royal Adelaide Hospital (RAH), delicate operations are usually conducted by highly trained specialists. On this occasion on ward 7E, it was a patient, Laura, performing the procedure on her doctor’s golden locks.

The barber of the day, Laura, is an emergency department nurse at The Queen Elizabeth Hospital and first worked with Dr Andrew Vanlint during his internship in 2014. They crossed paths again last year while Andrew was a registrar at Flinders Medical Centre (FMC), when Laura received her diagnosis of acute leukemia while pregnant with her third child.

Laura is very thankful of the care she received from the staff at FMC, who ensured she was able to spend as much time as possible with her baby while receiving chemotherapy treatment.

Now receiving treatment at the Royal Adelaide Hospital, Laura is full of praise for the support she and her family have received from the staff, and Andrew in particular.

“He has just been a godsend,” she declared, paying tribute to his knowledge and manner of explaining information relating to her care.

Laura said she was also grateful to participate in Andrew’s shave.

”I was very humbled to be able to do that for [Andrew], knowing what it is [like] to lose my hair,” she reflected.”

The funds raised in Andrew’s campaign have far exceeded his initial goal of $1000.

More about the World’s Greatest Shave

For more information about the World’s Greatest Shave, visit worldsgreatestshave.com