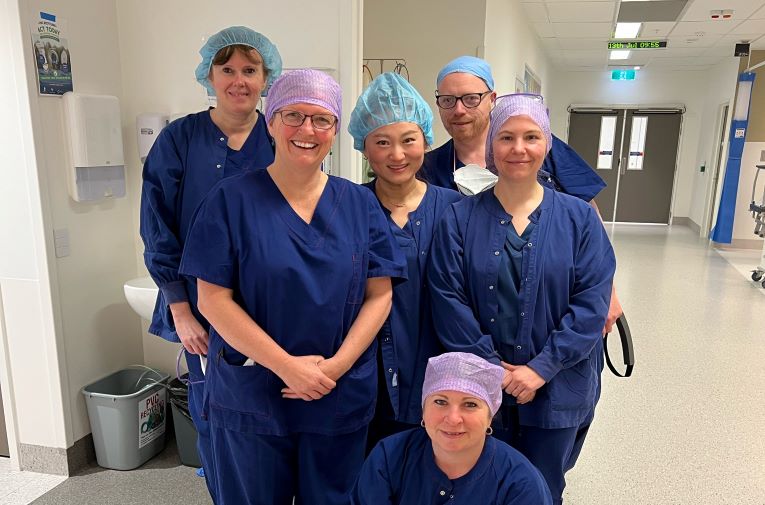 Endobronchial valves reduce inflated lung volumes in patients with limited treatment options, and the program is one of the first of its kind in Australia.

Delivering treatment to those who need it

The pioneering technique has provided a much-needed treatment to many South Australians with chronic obstructive pulmonary disease (COPD) who would otherwise have run out of treatment options.

“What I like about this program is that it’s a cutting-edge program supported by a health network with good principals behind of inclusivity – so that all patients have access to this treatment,” said Professor Phan Nguyen, Head of Unit, Department of Thoracic Medicine.

“It demonstrates that this kind of complex procedure can be done in a teaching hospital and get great results.”

To date the team has treated over 50 patients at the Royal Adelaide Hospital (RAH) and reduced patient reliance on therapeutic oxygen, improved lung function, improved quality of life and functional capacity.

The program can proudly report a success rate of 80 per cent, with no deaths, greater than the best international centres who typically achieve a 70 per cent success rate.

An effective solution to a complex problem

Emphysema is one of the conditions encompassed by COPD and involves the destruction of the air sacs responsible for gas exchange in the lungs. This damage inhibits the lungs’ ability to deflate in certain sections and results in hyperinflation, causing symptoms such as severe breathlessness, wheezing and ongoing fatigue.

EBVs are a relatively low-cost and safer solution, and work by blocking airflow to the most diseased parts of the lung. This allows the lung to decrease in volume and improve lung mechanics as well as a patient’s ability to breathe. The procedure can be completed within 45 mins and involves a two-day stay in hospital to monitor for complications.

The success of the program has paved the way for other public centres in Australia to build their own programs, including several hospitals in New South Wales and Victoria.

“Our program has given some momentum for other public centres to do this,” said Professor Nguyen.

The project team has also published a paper in Respiration highlighting one of their new methods of selecting the target lobe for endobronchial valve lung volume reduction.

According to Professor Nguyen, the success of the program is partly down to a close collaboration between thoracic medicine medical staff, nuclear medicine, radiology and nursing.

“It’s the teamwork that I’m most proud of,” said Professor Nguyen.

“Collaboration between our medical team, radiology, nuclear medicine, referrals from all centres, not just public or private hospitals, and our nursing team are a well-oiled machine – they could probably do it without me!”