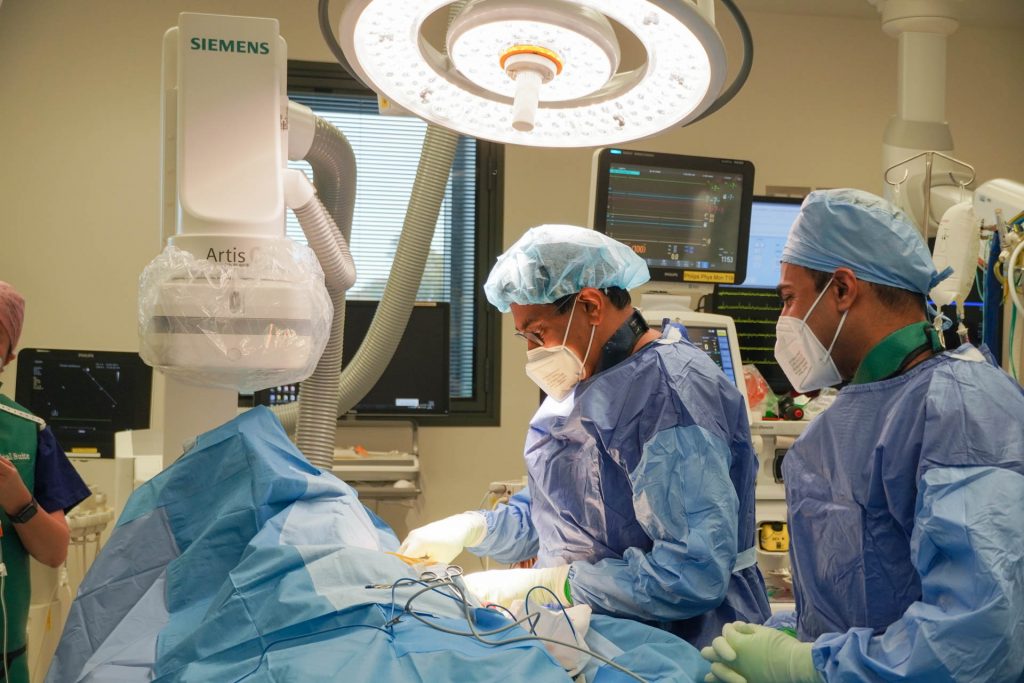 Next-gen cardiac procedures on the horizon for RAH patients

Pulse-field ablation is in development and promises to more precise, faster and safer than existing ablation techniques.

The future of cardiac ablation

Like a branding iron, existing ablation techniques restore a normal heart rhythm by damaging the cardiac tissue that causes irregular electrical signals with a catheter that applies extreme heat or cold.

“The problem with thermal energies is that when you stop heating, that hot tissue acts as its own heat generator and continues to cause lesions. So, the structures around can be damaged,” said Professor Prashanthan Sanders, Director of the Centre for Heart Rhythm Disorders at the Royal Adelaide Hospital.

Rather than thermal energy, the emerging pulse-field ablation technique applies ultra-rapid electrical pulses near the cardiac tissue, causing ion channels within the cell membranes to open. Fluid from the outside of the cell then goes into the cell, killing it instantly.

“You can oscillate and cause ion channels to open in cardiac tissue, but not in nerve tissue, or the oesophagus, or the lung, leaving those structures unaffected,” said Professor Sanders.

Rather than burning many individual points along the cardiac tissue, pulse-field ablation works across a larger surface area instantaneously.

Reduced cost, less need for anaesthesia, shorter length of stay, and faster procedures are some of the potential benefits of the new innovation.

What is currently a two- to four-hour procedure with an overnight stay may be reduced to a day procedure of less than one hour with the new technique.

“If you’re in the heart for under an hour, there’s less damage, and if you’ve got an energy source that’s less likely to cause injuries then that’s going to be safer as well,” said Professor Sanders.

The state of the art

Professor Sanders are refining the technique with pre-clinical models and pushing to deliver first-in-human trials in Australia.

His team have just published a study which developed computational models to determine the appropriate voltage to use and correct the distance from the tissue to apply it.

“We’ve modelled that and come up with the fact that we don’t have to be absolutely in contact with the tissue. As long as you’re close to the tissue, it’s probably good enough,” said Prof Sanders.

Further research plans include testing the other important variables of the technique, such as the required energy level delivered, the length of delivery, and the number of times delivered.