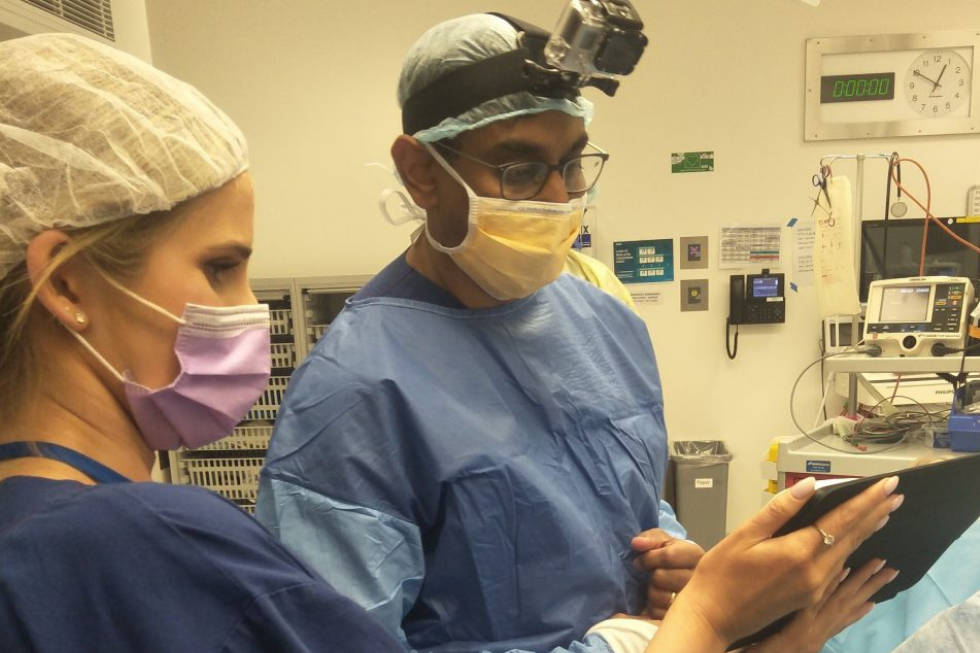 Patients who suffer strokes with an unknown cause can now be diagnosed earlier thanks to a new high-tech cardio monitoring device used for the first time at the Royal Adelaide Hospital (RAH) in November 2021.

Ischaemic strokes are caused by a blood clot, and in around a third of patients with this kind of stroke it is not clear where the clot has come from.

Heart monitoring is required to help determine the cause and has proven valuable in diagnosing atrial fibrillation in around 300 stroke patients at the RAH each year.

Glenys became the first patient in Australia to get access to the new device, known as LINQ II.
She had the device inserted just under the skin on her chest, with Bluetooth technology linking to a smartphone to enable data to be relayed in real time during a cardio event.

Asked what she thought about being the first patient to use this new device, Glenys said:

“I was quite intrigued. I thought ‘good old Adelaide, we’re in there! You don’t always think of Adelaide being at the front with these technologies, usually these things would happen in Sydney or Melbourne,” she said.

“I didn’t think about being a guinea pig until later, but I think it’s fantastic!”

Royal Adelaide Hospital director of cardio electrophysiology and pacing, Professor Prash Sanders said the device, originally developed in 2014, has been a game changer for individuals who suffer from a stroke with an unknown cause.

“While it has been a hugely beneficial diagnostic tool, particularly for the common cause of stroke known as atrial fibrillation, the previous device only sent data once a day from a base point in the patient’s home, and changes to programming could only be done during a visit to hospital,” he said.

“The ability to monitor a patient’s heart rhythms in real time and make adjustments to the recording parameters remotely will improve response time and importantly, remove the need for hospital visits for programming changes to the device.”