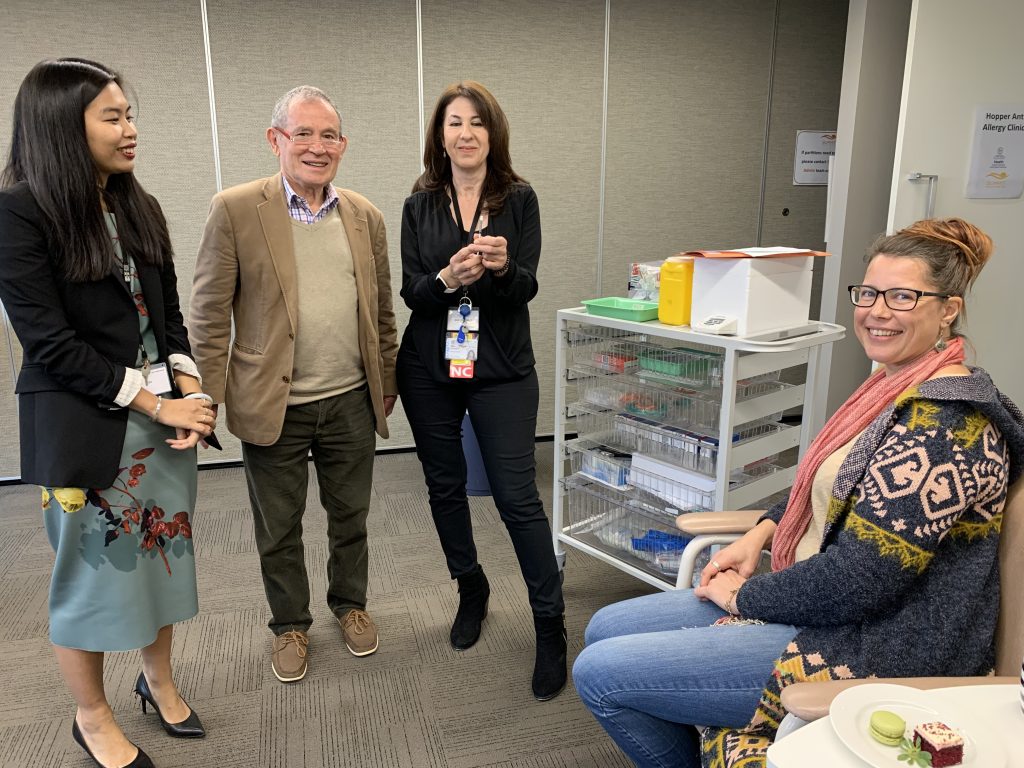 Imagine living in your own home and being scared to go outside; that’s the reality for some Adelaide Hills residents who are allergic to the potentially deadly Jack Jumper Ant (also known as Hopper Ants).

It’s the second most common venom allergy in SA, after bee stings, and for those with a severe allergy a sting from these insects can cause life-threatening anaphylaxis.

Fortunately, there is a highly effective desensitisation treatment available which reduces the risk of anaphylaxis from about 70 per cent to less than 5 per cent.

Until now this therapy had only been available at the Royal Adelaide Hospital where patients would travel for regular injections for at least five years.

Thanks to the work of the Central Adelaide Local Health Network (CALHN) immunology and allergy team, a new dedicated community clinic has been set up at Summit Health Centre in Mount Barker.

The majority of patients receiving this long-term treatment are from the Adelaide Hills region, where Jack Jumper Ants are endemic.

CALHN immunologist Dr Adriana Le said the treatment gives patients peace of mind because without it, they need to carry an EpiPen at all times and avoid being stung.

“Jack Jumper Ants are unusually aggressive and the more stings you have, the more chance you have to develop an allergy,” Dr Le said.

“Venom immunotherapy is a long-term commitment, requiring weekly injections for the first two-months and then on-going clinic visits every 4-12 weeks for top-up injections for five years or longer, but it is highly effective.

“The Mount Barker clinic will make it easier for patients to attend appointments, and it will also free up treatment spaces at the RAH for other procedures that really need to be performed in a hospital, including starting new patients on Jumper Jack Ant therapy.”

Venom immunotherapy involves giving patients a purified extract form of the venom, starting with a small amount and building up tolerance.

The initial 8-week build-up treatment phase will still need to be completed at the RAH, but patients will then be able to have the maintenance course in the community.

CALHN immunologist Emeritus Professor Bob Heddle was the driving force behind developing the treatment and has dedicated more than two decades to research in the field.

Further research is being undertaken to optimise this therapy and use it wisely, as venom is a limited resource.

Julianne Rice (pictured) was stung three times in a year after moving to Macclesfield in 2017, and the third event caused her to go into anaphylactic shock.

“Within a couple of minutes I couldn’t breathe, my vision was going black and I felt dizzy,” she said.

“I quickly realised I needed an ambulance.”

After that episode she was referred to the allergy clinic and at one point doctors told her to consider moving because her allergy was so severe.

“I was looking at rentals, talking to agents about selling. I didn’t know how effective the treatment was going to be.”

Fortunately, because the treatment is highly effective, she has responded well and she has also been able to avoid being stung again.

Working full-time and with children, attending appointments at the RAH has been a logistical challenge and she has welcomed the opening of a local clinic in Mount Barker.

“It’s much more convenient – a 15 minute trip rather than an hour,” Julianne said.

“Because the problem is largely through the Hills, it makes sense to have a treatment facility in the Hills.”