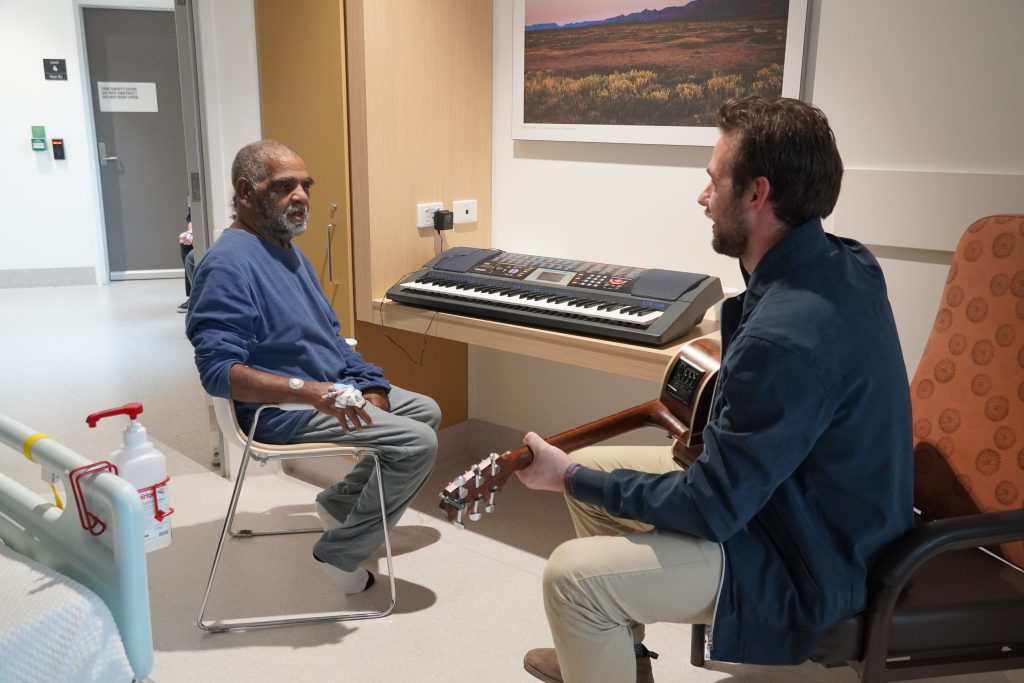 Music from the heart strikes a chord

Incorporating music therapy into his care plan helped Brian to cope with open-heart surgery and his fear of hospitals.

In his room at the Royal Adelaide Hospital (RAH), Brian is a long way from his family, his country and  community in Alice Springs, while he anxiously waits for open-heart surgery. Not only is he in an unfamiliar environment, Brian is also living with Schizophrenia and is partly blind.

To assist Brian to settle into his new environment and relieve his anxiety, his room at the RAH was transformed into a makeshift recording studio where he was able to record a song called Ngura Waltjipa.

Brian came to the RAH to be treated for pro-longed coronary artery disease, which causes him chest pain and shortness of breath, restricting exercise tolerance and independence.

Brian was referred to the music therapy program by his Aboriginal Health Nurse Esther Tredrea in an effort to help him feel at ease within the hospital environment. Music has been a formative part of Brian’s life and has helped him to share knowledge, connect with his community, and his clinical team during treatment.

Kate Tyrell Cardiology Nurse Consultant, Aboriginal Health, Heart & Lung says that for some Aboriginal patients being away from country can create a fear of coming to tertiary hospitals or mainstream service centres.

“It is important for clinicians to understand these challenges and aim to provide services which are meaningful and meet each clients’ unique needs,” says Kate.

Through partnership with NDIS and Centre for Creative Health, registered music therapists Jake Goss and Dr Patsy Tan collaborated with Brian on song structure and background music by creating chords and tempo and helping Brian practice and record two songs on a keyboard and guitar.

Dr Tan uses music therapy as an intervention in clinical practice to alleviate pain and anxiety for post-operative and neuro-rehabilitation patients and says music therapy can break down communication barriers between staff and patients.

She and Brian communicated through song only, until Brian felt comfortable enough to verbalise his feelings and readiness to take on his surgery.

“When Brian was playing or recording his music, he was relaxed, focused and happy, this was a part of his treatment that he was in full control of,” said Dr Tan.

When Brian’s surgery was delayed and  his time away from home extended, I was expecting that he would be anxious, but instead he said, “the way I see it, the longer I’m here, the longer I have to record.”

“Brian had a beautiful sense of melody, which he used to convey his lyrics and the powerful messages behind them. While he was able to accompany himself with the keyboard provided, he took a liking to the sound of my guitar, so he would teach me his songs to enable us to play together,” said Jake.

The first verse of the song Brian sings about his homeland, Kings Canyon in the Northern Territory. The lyrics in Pitjantjatjara say, “this place is a lonely place but a good place, sit down and listen to everything around, contemplate on everything and take it all in”.

The second verse is part of a dreaming story about two brothers, one with white hair, one with black hair both listening to this song and dancing together.

Brian shared his love for his homeland, how important it is to him for the stability of his mental health stating, “it helps me feel right on the inside”, which proved a true motivator in his health journey that he was able to connect to through music.

Brian’s daughter says keeping him motivated as part of his care has improved his wellbeing while in hospital awaiting surgery.

“He was getting bored and missing his family and getting sad. The music helps his mental health and makes him happy while he is here in hospital,” she said.

Brian is now back in Alice Springs with his family after a successful surgery and recovery.

CALHN offers services that empower Brian by including his music therapy as a part of his treatment, which played a significant role for him in finding strength and communication to get through his surgery.

Listen to Brian’s song below.