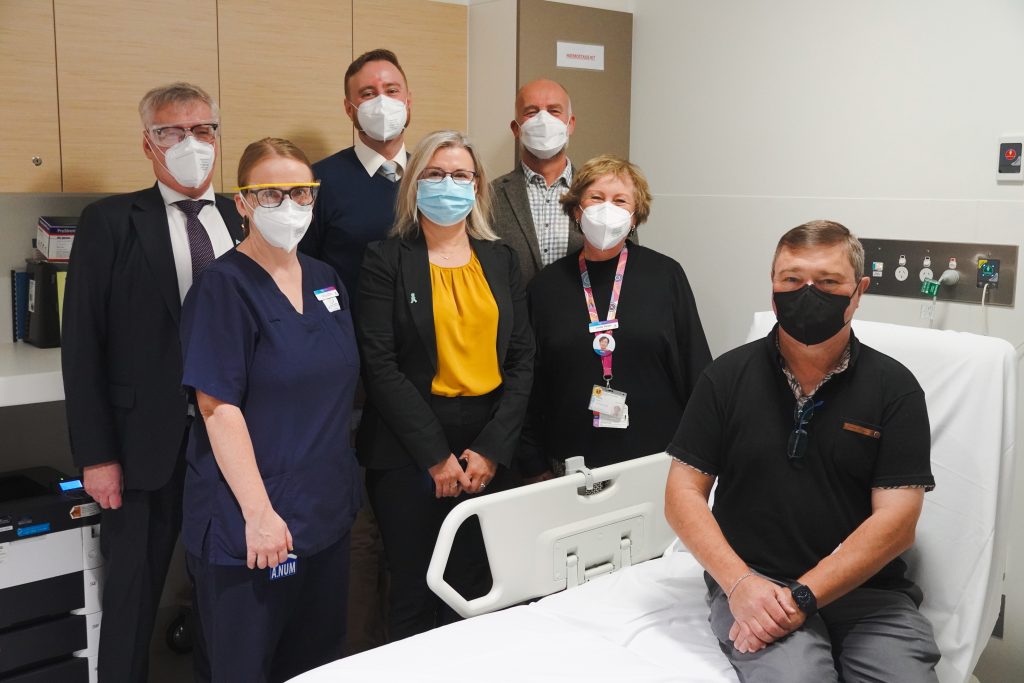 “Let’s make history”: World-first human trial the next step towards a cure for diabetes

A world-first treatment for type 1 diabetes on trial at the Royal Adelaide Hospital (RAH) is showing promising results after the very first surgery was performed earlier this month.

The revolutionary new method is a small step towards a legitimate cure for type 1 diabetes and implants insulin-producing islet cells into an artificial dermis (skin) in the patient’s arm.

Mr Alec Tibbitts was the first of three patients in a world-first three-month trial of the pioneering new treatment, which could lead to him no longer needing his daily insulin injections.

“[I wanted to be] part of a small step in what could eventually be a life-changing procedure for many thousands of patients.”

A better use of rare donations

Islet cells are created in the pancreas and produce the hormones that regulate blood sugar, such as insulin.

Transplantation of islet cells into the liver can help diabetics to produce their own insulin. But with this method, about 75 per cent of transplanted islet cells, donated from cadavers, are lost in the first 24 hours. This is due to the limited supply of oxygenated blood to the liver.

“You have to process three pancreases to get one that will work, so transplanting into the liver is a very inefficient procedure,” said Professor Coates.

“So the quest around the world has been to come up with alternative sites where the cells might be more likely to survive, and that’s what led us to start working here, looking at implanting into the skin.”

Sourcing islet cells from the pancreas of deceased donors means there is a finite supply. This places a limit on the number transplants that can be performed and the number of patients who can successfully benefit.

However, by creating an oxygen rich environment outside of the liver to support the survival and functioning of islet cells, the supply of donated cells can be better utilised to provide more transplants to more patients.

This approach involves the removal of a piece of the patient’s skin in the upper arm and replacement with a piece of novel polymer foam creating an artificial dermis (skin). This newly created artificial skin site becomes highly vascularised (high blood flow) creating a similar environment to that of a person’s pancreas. Once the artificial skin site has settled after around 20 days, the site is then injected with donor insulin-producing islets cells creating an insulin producing artificial pancreas for the patient in the skin of their upper arm.

This new method could also support alternative methods of sourcing donor islet cells. Stem cell-derived islets, for instance, may be able to be differentiated in a laboratory culture and then transplanted into the skin. This would further increase the precious supply, reducing or ending the reliance on rare donor islets.

The innovative treatment is also less invasive than the liver implantation method, as it can be done under local anaesthetic, is easy to monitor or remove and is significantly less expensive. It also provides the transplanted cells with their own blood supply, which reduces the risk to the patient.

One step closer to a possible cure

Although much more research is still to come, this world-first study is the culmination of eight years of work led by Professor Coates and initiated by Professor John Greenwood AM, the former Director of the RAH Burns Unit. Now retired, Professor Greenwood is world-renowned for his work treating complex burns and developing an artificial skin. The expertise of the two world-leading researchers combined to inspire the novel technique.

This proof-of-concept study will include three patients and last for three months. It is primarily to check that the procedure is safe for the recipient, and that the site works: that islets can survive and secrete insulin.

“This is just the beginning – the first step,” declared Professor Coates.

If the trial is successful, the next step would be to gather further data from more participants. Clinicians and patients alike are optimistic that this world-class research can be pathway towards a cure for type 1 diabetes.

If we can get to the point where type 1 diabetics can produce their own insulin, then that would be historic,” said Mr Tibbitts.

As Mr Tibbitts said in the moments before his pioneering procedure:

This world-leading research was funded through the JDRF Pilot and Innovation Awards, with research done at the renal laboratories in the University of Adelaide in collaboration with local South Australian biotech company Beta Cell Technologies Pty Ltd.